Life is a little simpler with the 3Bs

With baby #3, I sweat a little less because I am calmer and more organised at handling her. I take things as they come and try not set any unrealistic goals, like I had done with my earlier two girls. In fact, I hardly set any goals this time around. You'll understand more by reading my thoughts on life with three children.

I never succeeded in exclusively breastfeeding my elder two children. Eldest was breastfed for 7 months but never exclusively. In a day, she was given a bottle or two of formula milk.

My second child hardly had any breast milk because I was unaware and inexperienced. I thought perhaps, I couldn't produce enough milk to satisfy her needs. Also, giving up and switching to infant formula was much easier than getting her to latch on and not cry out each time I tried feeding her.

During my third pregnancy, I had time to research about the struggles of breastfeeding and joined some breastfeeding groups. I learned a lot by listening to experiences being shared and advises being given by breastfeeding mothers. I never knew the extent of initial struggles and sacrifices involved in being able to breastfeed exclusively.

I still remember my zombie-fied days and loneliness because I had to let my newborn suckle every hour! I remember not leaving my bedroom for weeks and the only time my baby was not latched on, was when I was having my meals or in the bathroom. I was breastfeeding and pumping, to increase my milk supply. It was very demotivating to see that I could only produce 2oz after 40 minutes of pumping!

I thought of giving up, but I had a good support system.

My numerous sad and desperate emails were always answered by my friends with encouraging words. Everything they said was so true, but was hard to believe it at that particular moment in my life.

When my infant was about 7 weeks old, I was quite pooped because I haven't had a proper sleep for almost 4 days in a row. Apart from being kept awake by the baby, my eldest had developed fever. My husband was nursing her fever by continuously sponging and checking her temperature. I couldn't stop myself from going to her room and checking on her too.

Luckily her fever broke the day my husband  was to leave for his business trip (which he had already postponed). I assured him I could handle it own my own and he needn't worry.

It was a chaotic night. Imagine rushing from one room to the next, I had to closely monitor my eldest daughter's fever (although, it had gone down but she still got the cold shivers and would call for me to be next to her), keep an eye out at my second child, who was showing signs of infection catching on and feeding my newborn.
(The three of them were quarantined in separate rooms, hoping to contain the infectious bug).

I faltered and fell when I saw my newborn showing signs of infection. That was the last straw and I broke down. I knew then I could not do this own my own and when he called from the airport to check how I was doing, I begged him to return. I had caused him to abort boarding his scheduled airplane and rush back home.

Although he had checked-in his luggage he didn't fail me. He ran the opposite direction while his name was being paged to board the flight. Must have been like a scene from a movie.

I am glad I stuck to it and after 7 weeks of nerve wrecking and almost going insane period was over, everything fell into place. Breastfeeding has made life a little simpler for me now. I am able to handle her night feeds on my own, unlike when I was bottle feeding.

A friend couldn't help himself from joking about the way we prepared baby formula. "It's like running a science lab!" he'd say each time he caught me preparing a feed for my baby. Come to think of it, it did seem like that. The process of measuring water in the bottle, followed by getting levelled scoops of formula milk into it, stirring gently to ensure not to produce too many air bubbles and finally checking to see the milk isn't too hot for the baby.
Imagine trying to achieve all that while holding a hungry crying baby.

Since breastfeeding, all I have to do is feed her. I can even do it while lying down! 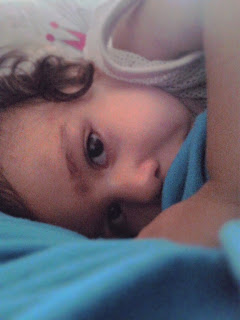 I had always practised co-sleeping. When my first child was born, she shared my room but had her own cot. We were hesitant to share our bed with her for fear of suffocating her with our pillows and blankets. I slept better knowing she was safe in her cot. I practised the same with baby #2.

Baby #3 never liked sleeping in the cot. She would not sleep in it and had no trouble voicing out her disapproval by keeping us awake, the whole night.

I finally succumbed to her demands and let instincts take over.

Bed-sharing sharing and breastfeeding jived well. Thanks to these, no more crying baby in the night. I am always ready to answer all her needs even before she gets a chance to voice it. Being a light sleeper also helps.

At about 2 months, my baby became aware of my movement. She could sense whenever I wasn't close to her and would cry. It got to the point where I wasn't able to take a shower. If I am next to her, she would sleep for 2 hours straight but would awake the moment I am not around.

Cooking was almost impossible while holding her in my arms. I had to rely on my oven and learn to bake my food instead of my usual stir fries and curries. I didn't want to chance any oil splatter on her while I was cooking AND holding her.

I am not sure how I stumbled upon the Malaysian Babywearers but I learnt a lot from them. I managed to carry her and complete many chores in the house. I didn't panic when she got up (before babywearing I would have to drop everything and rush to her) because I could carry on doing whatever I was while wearing her. It was amazing how she would sleep so soundly each time I carried her in a baby carrier.

I started off with a structured carrier which was lent to me by a mother front the group. This was really good during the day when it's hot. Then I was given a ring sling. Loved it to bits and it looked good too.
Finally, I bought my first wrap and then, there was no turning back. I was able to carry her in so many positions and do so much with it.

She is now 17 months and I still carry her everywhere I go. Having my hands free while carrying her is so rewarding. I don't think I will ever use my stroller because that slows me down, especially when I am  in crowded places.


This article is also featured in local daily, The Star