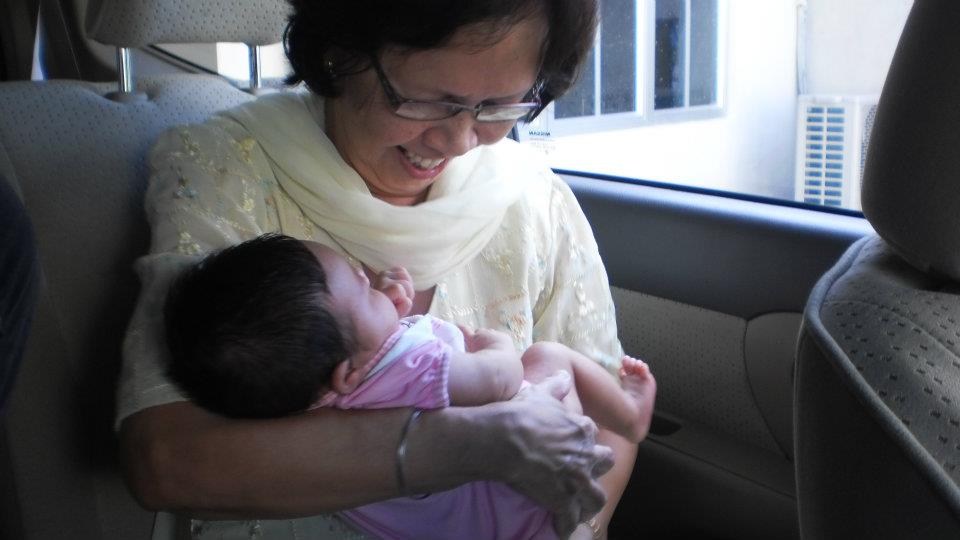 It was just another evening with a simple dinner - baked foil fish with vegetables and pasta - but the night was particularly cooler than other nights, thanks to the unexpected heavy shower in the middle of a very dry season. Because of the heavy downpour, our daily trip to neighbourhood park was cancelled. I figured it would be good to have early dinner so I can put the kids to bed earlier than usual and get snuggling under the covers with my husband - it's not often I get days like these which remind me of my chilly days in Dublin. But who would have thought, the continuing light shower and thunder would have set the mood for a more sombre topic of discussion at the dining table. It was about death.

Death of a loved one, to be more precise.

It wasn't planned. Neither my husband nor I had a chance to gather our thoughts on how to discuss death with my young children. Though we knew we had to at some point.

"Will she get better?"

That's how it began.
My almost a tween daughter, very in tune with her emotions, was able to sense a change in the mood at the mere mention of her ailing grandmother.

She knew her grandma's battle with cancer was a little different this time because it had robbed her of her grandma's happy, loving and fun self and replaced her with  frail looking, unhappy, bedridden and lifeless person. A person that looked like her grandma with lifeless eyes.

Eyes are the window's to ones soul, I believe. Her grandma's eyes were supposed to be a projectory of the exciting life she lived, but these eyes we now gaze into  projected nothing more. They were just eyes merely looking back at us emptily.

"Will she get better?"

There was so much pain and courage heard in my child's little voice. It was as though she was afraid to ask her father and me this question. Perhaps she already knew the answer but  was afraid of affirmation.

Not willing to let her bear this pain alone, we both decided it was about time they knew exactly what was happening. We had not hidden any truth from them but kept the finer details of  their grandma's ailments from them because there was a sliver of hope that she, their grandma, might just come out triumphant from her battle with cancer, once more.

After a long pause with only the sound of forks and knives piercing the beautifully quiet night, my husband broke the silence with a sharp "No".

"What do you mean?", asked my bubbly and full of life eight year old child while her elder sister had fat tears rolling down her pink cheeks. The elder one immediately pushed away her half finished meal which had suddenly lost its appeal and kept her head low, trying her very best to put a stop to her tears that leaked like a broken faucet's.

All of a sudden everything had gone quiet again. Even the toddler who was earlier creating a ruckus by banging on her high chair with a plastic fork and knife, sensed the change in mood. She now puts down her plastic cutlery.

Unconvinced, my eight year old, who was increasingly getting uncomfortable with the awkwardness of the situation, kept repeating "no" while shaking her head. "This is too much! She will get better-lah, she did it once and she will do it again!" she kept repeating, with a tremble in her voice. Perhaps to block out what her dad had just revealed. But despite that brave front, she was at the verge of breaking down into an uncontrollable cry and avoided all eye contact with either one of us.

It definitely was a beautiful night to snuggle under the covers but not with my husband. Instead we spent the whole night holding our girls and listening to them talk about the wonderful things their grandma used to tell them. Every memory of time spent with her, listening to her exciting stories about her childhood and the childhood of their father. Each tear shed was healed by a beautiful memory.

I am glad my girls had the opportunity to be cherished, schooled, fed, dressed and spoilt by their grandma despite living in different states. These are the memories that are keeping them strong in this trying time. They are not afraid to approach her as she lays still on her deathbed because they know her so well and this new person, just a shell of her former self, does not scare them.

The eight year old has taken it upon herself to feed, bathe, massage, medicate and give comfort to her grandma. I am awed at her ability to provide comfort without flinching or showing any signs of disgust because it is not easy to care for the sick. My eldest child who loves grandma's cooking, helps to prepare food for her grandma and ensures the toddler doesn't bother grandma too much.

I believe all this is possible because of the time they had spent together. I believe this is their way of giving back for all that grandma has done for us and she has done A LOT!

May my kids stay strong together this way forever. May god bless me with the love and support my mothers have shown my kids so I can carry on their legacy, long after they are gone.