Lessons from your loved ones

We all know death is inevitable but I cannot decide which is more painful, losing someone suddenly or watch them suffer as their life slips away. Hear these words that come from someone very dear to me and how his perspective on life has changed since his mother was diagnosed with cancer. 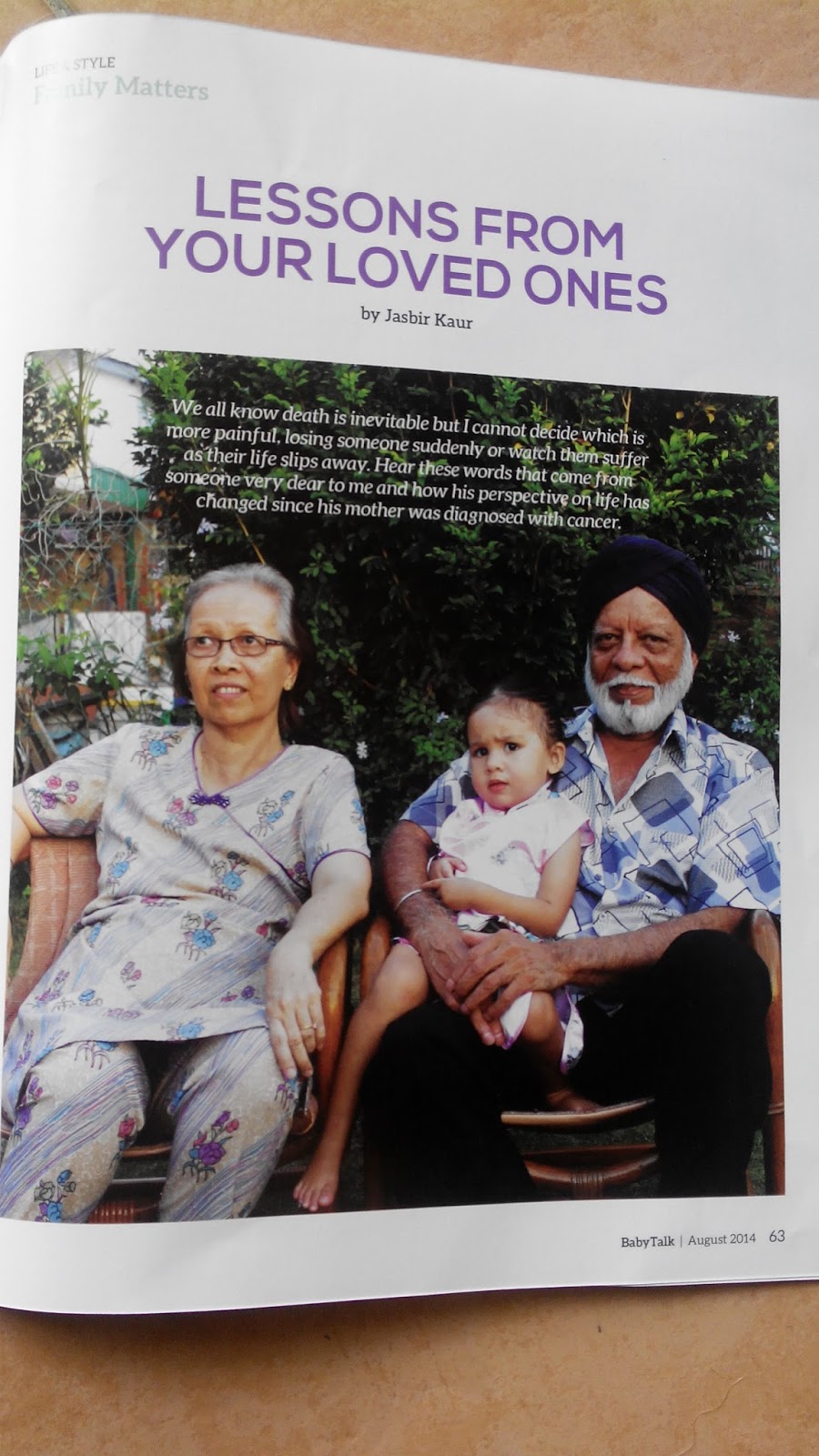 "When you remember someone you love from your lifetime of memories, when you try to extract your lasting impressions of that someone from your memories, quite often these memories tend to be selective of the best. The best of that loved one.

She wasn't a saint, to be honest. Like everyone else, she had her flaws. Her penchant of saving every cent, be it using recycled water from the washing machine to clean the porch, to forcing us to eat every morsel of food in appreciation of it. These were my niggling irritants. Like an itch that would last a minute, no more.

She would complain of people who didn't really live the life she was living. And I would listen, with thoughts of football or whatever else swirling around my head at the same time.

But I hold on more to the memories of her smiling, of her laughing, of her teaching me to be an honest man. Nothing to do with religion, but more to be what humanity expects me to be. To be more humane.

My memories tell me she had inner strength, of a will to endure and come out of any emotional battles stronger than before.

Even in the early days of her chemotherapy, she would lament a bit but steadfastly tell us that if she had to endure she would. Her husband demands that she fight it and she wholeheartedly agrees with him. Very much like the past 50 years of their entwined years together.

When the news came that the cancer had spread, suggesting that she needed another 6 months of chemotherapy, there was genuine fear, not of the disease, but of the effects of the therapy itself. She hated vomiting. But she hated being invalid even more. She hated not being able to work as she had worked so ever tirelessly for her husband and children for 5 decades now.

I could see the changes slowly creeping in. The smiles became more infrequent. The laugh, no more, not even forced. I had reasoned that her hatred to being so utterly tired all the time was finally getting to her. Being sick and weak a day can drive me mad, she was already in her fifth month.

"Why am I still so weak?" she would ask me, her eyes begging me to say something that can make her herself again, just enough to walk down to the kitchen and stand there for hours preparing the food her grandchildren loved so much.

Her physical appearances improved as the days go by after her last injections. Her lips became pink, her hair growing longer and soft. But internally, the depression due to her being so weak for so long took a stronger hold on her heart.

My memories tell me that her old normal self would've snapped out of it, would've gotten tired of being tired, would've thrown caution to the wind and just forced herself to be her old self. It wouldn't be shocking if she braved herself to suffer in silence, still smiling and still laughing. She had that strong an inner strength. Depression was alien to her throughout my life. At least that's what my memories tell me.

She would repeat every so often to the younger me, "Happiness is a choice. You can choose to not sulk anymore and just carry on, you know?", sometimes even trying to force that upon the spoilt brat that I was.

I wasn't entirely shocked when my father blamed the chemo therapy for the emotional and mental changes she was displaying. "That's not really Mom saying all that, is it?".

I still believe she'll snap out of it. Sooner or later. My memories tell me so.

But she has taught me another lesson, hopefully it will be part of my memories in the future.The lesson to not take for granted the ability to choose for happiness. You can choose for happiness, so long as you have the ability to choose. But that ability can't be taken for granted because circuitry can be fried very easily.
I pray that this lesson stays with me from now because I might need it to snap out of depression should it happen as it happened to my mother." 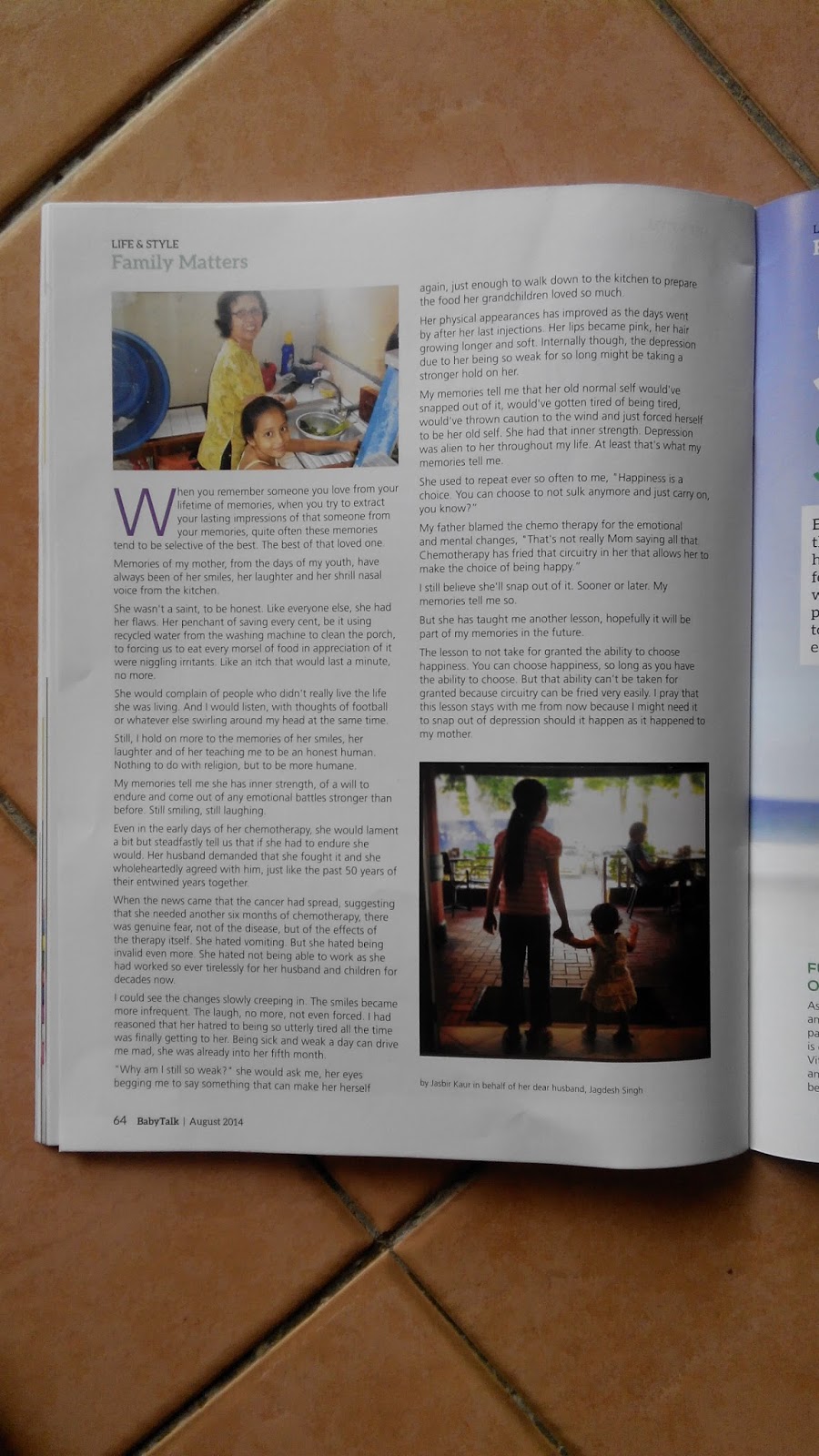 Thank you for stopping by at A cuppa for my thoughts
Lets get connected: